Aqua Pool & Patio Inc. of East Windsor, an in-ground gunite pool construction and swimming pool service company, is currently celebrating its 50th year of continuous operation. Founded in 1970, the company has been building and servicing pools and spas all over southern New England for five decades!

Ron Giannamore bought a pool from Aqua Pool in 1970, the company’s first year of operation. As a young father with five children and a job as an electrical engineer, he thought that a backyard pool would be a great investment for the family. Once completed, he appreciated its many benefits and joined the team as a designer. Eventually Ron became a partner and then 100-percent owner.

After growing up with the company since his youth, Ron’s son, Michael Giannamore, joined Aqua Pool full time after earning a master’s degree in education. Ron is now retired and Michael is running the company with his sister, Debbie Madden, and the company’s long-time construction manager, Gregg Pruitt.

Aqua Pool builds in-ground gunite pools only. As the longest lasting and most structurally engineered pool one can buy, the Giannamore family believes it is worth the small additional investment due to the longevity of the product. While some pool companies “specialize in everything,” Aqua Pool believes that true specialization comes from finding the best product and becoming the best at producing that one item.

“Everything here is over-engineered,” as Michael likes to say, due to Ron’s many years as an electrical engineer (he holds several patents in his field). While Ron brought his engineering expertise to Aqua Pool, Michael now brings his education background, emphasizing training for all staff to ensure the best products and services for the company’s customers.

The company covers the entire state of Connecticut, western Massachusetts, and the border towns of New York and Rhode Island. Due to the company’s longevity, Aqua Pool has built pools for clients whose children have now bought pools. There are have several clients with two pools built by Aqua Pool, and even a handful with three! Aqua Pool’s clients continuously return to the company for service, advice, and the latest technological advances in the industry.

Not many companies can honestly say, “over 50 years in business.” Aqua Pool can. They haven’t changed their name, gone out of business, or changed registration numbers since inception. And that is not an easy task. Some years have been better than others and of course the economy affects the pool business. However, with the systems put in place by Ron, and now with Michael continuously educating the staff to know all the best practices, the company is poised for many more decades of building gunite pools.

With over 45 employees, the company has been recognized as one of the Top 50 pool builders in the country 7 years in a row (Pool & Spa News – Top 50 Pool Builders). They are known for building the highest quality pools at a fair price while also offering every type of pool service.

Congratulations to Michael, Ron and the rest of the staff for a hard to reach milestone! To learn more about the company, visit their web site or give the office a call at 800-722-2782. 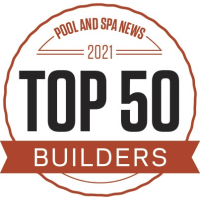 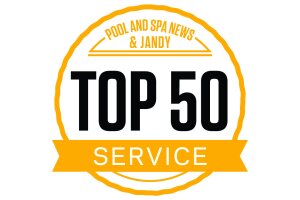